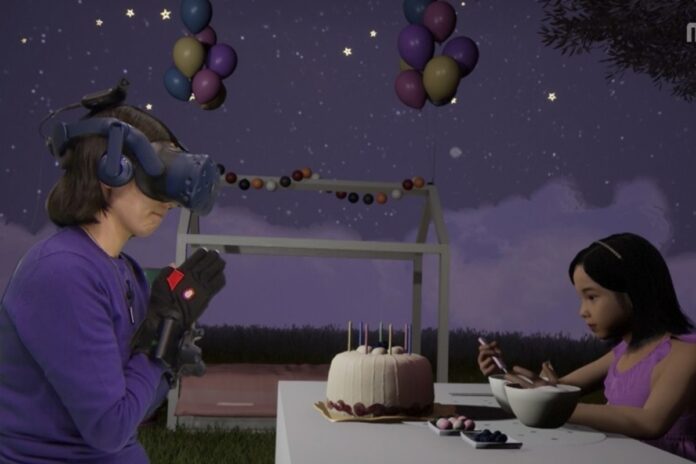 Death has many faces but it has the same effect on every person that experiences it. During the coronavirus pandemic, Zoom funerals proved how important it is for humans to celebrate the life of a loved one. Grieve the fact that we are never seeing them again. What if there was a way to connect with a loved one in a space not governed by time? This idea may not appeal to everyone but it certainly did to Jang Ji-Sung, a mother who lost her daughter to blood cancer in 2016. She may not have been the first mother to lose a child, but she might be the first one to reconnect with her in VR.

This experience was part of a South Korean documentary, “Meeting You.” The documentary team worked with 6 different studios to create this VR experience. The reunion between Jang Ji-Sung and her daughter Nayeon forms part of the climax of the documentary that aired in February. Nayeon was only seven years old when she passed away. She has continued living according to her father, mother, and siblings.

The documentary is but one of how VR technology can be infinitely used for different purposes. Even though VR technology is still too young to be seen as an independent art form, film scholar, Tom Gunning, claims that this was the same with previous inventions. No one could even have thought that the photograph could capture an object trapped in time. It is difficult to view VR as an art form. We are still too suspicious of what it is and what it can do for us. The reproductions are often uncanny avatars that might elicit very little emotion.

The theme of technological resurrection is not a new one but it is almost placed in a dystopian context. Series like Black Mirror explores the idea of AI recreating a deceased loved one by using their social media posts and profiles in the “Be Right Back” episode. There are nonfiction projects that have also been created, for example, “Dadbot” by James Vlahos. His 2017 project shows his attempt to recreate his dying father’s personality in a chatbot. Similarly, the game “That Dragon, Cancer” was designed by a dad who tried to process the gradual death of his cancer-stricken son. 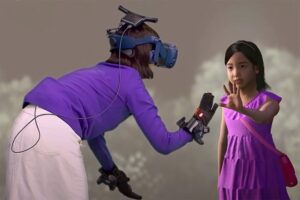 Meeting You, however, is not like “Dadbot” or “That Dragon, Cancer.” It is deliberately realistic and this might be why it’s teaser clip has received over 20 million views. It is a new idea that causes tremendous unease at the same time. Even though Nayeon was created to be innocent, it was still adult VR operators controlling her. The cinematic VR experience showed her mom surrounded by green screens. It toggles between her actions and the VR interactions she has with her daughter. From a two-dimensional perspective, Nayeon looks like a computer graphic yet still eerily realistic.

VR Nayeon says things like, “Am I cute?” and at one point, she has her mother touch her hand as they float into a twilight sky. They continue to celebrate her birthday and do all her favorite things until she falls asleep, telling her mother that she loves her. The interactions are not very interactive due to them following a script. Her mother said,” That she felt different from the real Nayeon. When she ran or sat down at a distance, she could see the resemblance. This detachment might have to do with the fact that her mother interacted with a 10-year Nayeon, not the 7-year old she had to say goodbye to.

To better understand the considerations and planning that went into this documentary, Violet Kim from Slate, interviewed with director and producer of Missing You, Jong-woo Kim. According to Kim, the structured quality of the documentary was due to technical and budget constraints but this is made up of micro-interactions, for example, if Nayeon’s hair was touched it would respond. He further said,” The immersiveness was largely due to meetings with her mother. When planning we aimed towards understanding what she wanted. It was the family’s idea, to have them float into the sky.

The documentary also features interviews conducted with Jang Ji-sung where she reminisces and talks about her daughter. The family history is further explored in the sequel to Meeting You which was released in March. Here it is suggested that Ji-sung felt inadequate during the last few days of Nayeon’s life. From the viewer’s perspective, the most remarkable aspect of the sequel is the seemingly fictionalized voice-over speaking from the perspective of the youngest daughter. Kim stated that they wanted to bring a graceful closure to the documentary along with having the perspective of death given through the eyes of a child.

The production suggests a less independent VR reality experience and more of family history that the producers could manipulate in VR. These manipulations are a success as Nayeon’s mother told Kim that the experience felt like a wonderful dream. This project has, however, raised several ethical questions like the VR rendering of a child who is not there to give her consent. Kim did not see consent as a unique requisite for this project. He argued that most of the images we see online are without consent.

This particular family was selected because it demonstrated a specific desire for a VR reunion. There were, however, a lot of unknown factors as to how it would affect the family. Kim explained that the producers met with a family therapist to approach this project with the necessary sensitivity. Kim explained that his experience does not attempt to heal or analyze death; it simply reunites a mother with her daughter for a moment.

VR has been used for various reasons like treating PTSD in soldiers and relieving physical pain in patients. There is no telling what the future holds for VR but perhaps we can greet it without suspicion and allow it to improve our lives.